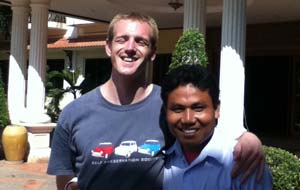 "I just got back yesterday had a really good time, thanks for the tip." 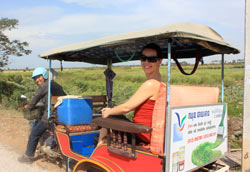 "My friend and I were lucky enough to have Mr Pheng as our tuk tuk driver during our trip to Siem Reap in March. He was the most wonderful person to spend a few days with - so kind and considerate, and his local knowledge was next to none. He couldn't do enough for us - picking us up and dropping us off whenever and wherever we wanted (even at 4.30am to watch sunrise over Ankor Wat!). He always had cold fresh water for us (a very welcome treat when we emerged from a temple hot, dusty and thirsty!) He knew the best places to visit in the area - sites and restaurants. He even planned a personal itinerary for us so we could fit everything we wanted into a few short days. After a couple of days he took us to meet his family and see his home - a great honour! We took gifts for his wife and daughters, which they loved, and spent the afternoon chatting with them. It really was a very special few days thanks to Mr Pheng. And best of all was his wonderful smile and great laugh - he was such a lovely man! We cannot recommend him enough." 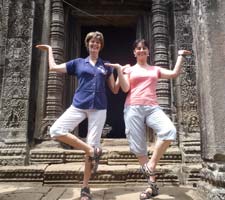 "Mr Pheng greeted us every morning with a beautiful smile and a day carefully planned around the most interesting sights of Siem Reap. When we had explored the area he would be waiting with his tuk tuk and an eski full of iced, bottled water. Travelling around Siem Reap in the tuk tuk was the only way to see the city, it was so much fun and helped you feel the place as well as see it. Mr Pheng...an absolute gem!!!!" 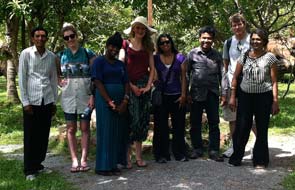 "Mr Pheng was a fantastic tuk tuk driver. He was always smiling, helpful and cheerful, and got to know us personally over the few days we were at Siem Reap. He had great knowledge of the local area, and of good places to see and visit around the usual sights. I'd highly recommend him." 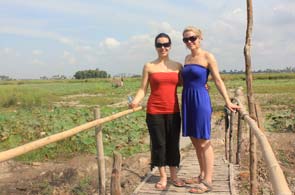 "Meeting Mr Pheng was one of the highlights of our trip to Cambodia. He knew exactly the right places to take us to, and where to get the best sunrise over the temples without the crowds! He would be standing waiting for us with a big grin and bottles of iced water, after we had finished exploring different temples. He is such a kind and trustworthy man, and nothing was too much trouble. He is devoted to his family, and all the money he makes goes towards his daughters' education. We were lucky enough to be invited to his village to meet his wife and family, who were all just as charming and welcoming as Mr Pheng." 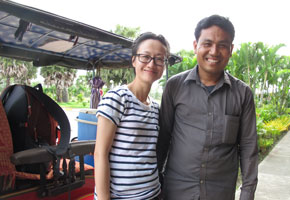 "We have visited Siem Reap for three days in October and hired Mr Ty Pheng as our tuk tuk driver. It was our first time to Siem Reap and there seem to be many places we wanted to go and wasn't sure how we should plan each day. Mr Pheng gave us suggestions on each day's itinerary by email before our arrival and we were extremely happy with his tour. Mr Pheng is very knowledgable on Siem Reap and he is the friendliest and nicest guy we've ever met! He made such an impression on us, we would love to go back and visit again!"

"I had the pleasure of meeting Pheng in 2011 when I visited Siem Reap. I was travelling alone and was a little apprehensive as I had always travelled with someone but Pheng immediately made me feel comfortable and at home in his country. Pheng made my trip very memorable by taking me to see many amazing sites and his knowledge of the area ensured I made the most of my time in Siem Reap. Pheng has the most infectious smile and it is really hard not to smile right along with him! I have referred him to many friends and they all agree that Pheng made their visits to Cambodia even more enjoyable! I will definitely be going back to visit Pheng again!"

"Mr. Pheng was a blessing during our time in Siem Reap. We met him at the airport upon arrival and he drove us to our hotel. We were immediately impressed by his kindness, language skills and knowledge about the area. Once at the hotel, Mr. Pheng asked us whether he may drive us around the temples the following days. Since he made us such a good impression we said yes and it was the best decision. Mr. Pheng took us during three days on the Grand Tour, Small Tour and to the Roluos Group and Tonle Sap respectively. We enjoyed full flexibility for exploring the temples as Mr. Pheng was always waiting for us when we exited the temple to bring us to the next. He arranged for cool water, including the fridge box and the ice, brought us to nice restaurants and even offered his availability to drive us around Siem Reap at night. He is a great person and would suggest to anyone traveling to Siem Reap to get in touch with him. Thank you Mr. Pheng for making our exploring in Angkor so easy! We will be back."